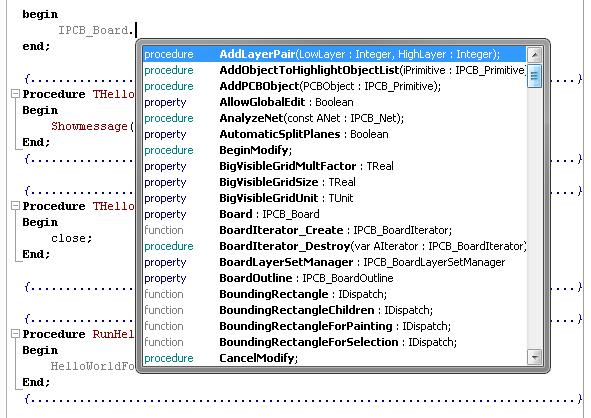 Scripts are a great way to extend the features of Altium Designer: as soon as you have custom needs, writing a script could be a good option.
If you have already programmed some Altium Designer scripts, you can directly jump to my Code examples at the end of the article.

About the use of scripts

In the past I wrote a starting guide about scripts. If you are not used to the scripting system of Altium Designer, I would recommend to read this article first:

The most widely used is probably DelphiScript. At least the vast majority of examples are written with this language.
From what I have seen so far, VBScript holds the second position. The syntax is quite, but not strictly, similar to VBA (Visual Basic for Applications), widely used for MS Office macros.

IMPORTANT NOTICE: Since Altium Designer version 18, you’re not asked what language you want to work with while creating a script file. DelphiScript (*.pas) is assumed to be the one and only language for scripts.
Don’t worry, the other languages cited above are still supported. For the moment…

The first version of the scripting documentation (“wiki.altium.com”) was a nightmare. It was very difficult to find where to start when you were a newcomer.
The today’s version is better in terms of organization and readability (“techdocs.altium.com”). But it has never been ported to the new Altium Designer documentation system (“altium.com/documentation”)! The Altium teams don’t seem very much involved in pushing the scripting system forward.

If I were you, I would start by reading the following documentation articles:

Working with the API

The API (Application Programming Interface) is the part of Altium Designer which allow developers to interact with internal functions from “outside”, ie. from user scripts / add-ons.

Based on what you’re trying to do, you will use different APIs:

“Servers are represented by IServerModule interfaces. These interfaces are declared and partially implemented in the RT_ClientServerInterfaces unit.”

Each of the Schematic API, PCB API, Integrated Library API and Vault/Nexus API inherits from a “Server object model”:

The Workspace Manager doesn’t inherit the “IServerModule” interface. Instead it gives an access to the DM interfaces (Documents Model? Documents Manager? Design Manager?), but it’s kind of “read-only”. Unlike the SCH Server or PCB Server, the Workspace Manager is always available even if no document is open.

Here is the IWorkspace object structure:

The whole API documentation is available in a single PDF document (1144 pages). This is the perfect document in which you could search for any function or parameter.

In the development process, something may go wrong. A buggy script could really mess up an entire project. Be sure to always test your scripts on dummy project files.
Furthermore, a badly written script can lock-up the Altium Designer user interface, forcing you to kill the program the dirty way. Be prepared for that!

Altium Designer itself act as an IDE (Integrated Development Environment) for script programming. I don’t really like the embedded editor but I must admit it gives you some power in the development process.
I personally use the code completion feature as an “in-editor documentation”. At any time, hit CTRL + Space to grab the auto-completion box.

In the good old days, i.e. until Altium Designer 17.X, a “Run Process” direct access were available. This was really helpful to test and debug some commands outside of a script.
Since Altium Designer version 18 this dialog has disappeared. A shame for us as developers.

Some documentation pages can really help you being efficient in your programming tasks:

Keyboard shortcut keys available in the scripting context are listed in the “Script editor tools” page.

Creating a script (without a graphical interface) is an easy task:

The official documentation won’t encourage you to create a script outside of a script project, but if you don’t need to split your code across multiple files you may not need a project file.

“When multiple scripts are in a project, any script (using the same language set) within that project has access to global variables and procedures. All scripts in a project are ‘visible’ in effect, so a procedure in one script can call another procedure in different script within the same script project.”

Take inspiration from others

Again, the official script examples are here to help when trying to program a script from scratch.

If you want to broaden your mind, the “Altium Designer add-ons” project is probably the thing you should look at. Several users posted their codes and many use cases are addressed (schematics, PCB, automation, release process, …). Mostly written in DelphiScript, but other languages are also available.

Geoffrey HUNTER gave us its feedback from his programming experience with Altium Designer scripts: Altium scripting and using the API, PCB-related API.
He also made his scripts publicly available (VBScript). This is a solid source of inspiration: AltiumScriptCentral.

All my examples are written in VBScript. If you want to program in an other language, you will need to adapt the following code snippets.
No graphical interface example for the moment, but don’t worry: many tasks can be achieved without having one. If you absolutely need a GUI, explore the documentation and look at the examples.

First things first: let’s test the execution of a simple script by popping-up dialogs to the user!

Don’t know how to run the script? Didn’t you read the above instructions too fast?! I don’t blame you: here is the cheat sheet.

Write to the “Messages” panel

This is my preferred way to show the progress of a script execution. Plus it can tell the user on which objects the script did some modifications.

Each AddMessage() instruction could be associated with a small image to illustrate the message. Have a look at the image index table: “2” is the equivalent for “Part” (‘IndexPart’).

Verify things you are going to work on

As a good programming habit, check every objects you’re gonna work with:

Navigate through an entire document

Now you would be tempted to act on objects contained in a document: iterators + filters are the way to go.
Here is an example which loops on every parameters of every parts of the currently focused schematic document.

It’s convenient for the end user to be able to revert the changes made by a script. This is your job, as a developer, to tell the system if the “Undo” feature would work and how.
You can decide what to put in the undo stack. If you’re doing a lot of modifications, I would recommend to do a single call of the below functions. This way, the “Undo” command will revert all the changes at once.

Simple things to know before editing the content of a document.