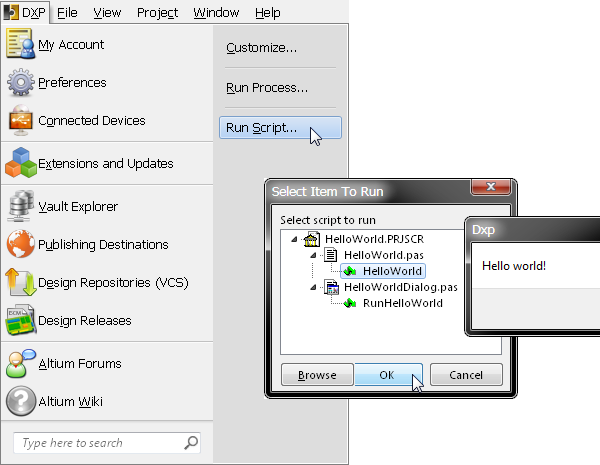 What is an Electronics CAD tool with an embedded interpreter for scripts? It’s a great CAD tool, of course! Many professional ECAD software give users an access to an API through a scripting system, enabling us to automate some repetitive tasks. I don’t use other CAD systems than Altium Designer much but I’m sure Autodesk Eagle supports scripting and I suppose software packages from Mentor, Cadence, Zuken or even from Open Source communities (KiCad?) do the same.

Here are examples of what you can achieve with scripts:

Scripts are little pieces of code (you can see them as “lightweight software”) that you can easily execute, edit and enhance. They act exactly like macros which you “Record, Stop, Play” but are built from human-readable text. Text is great because it’s light, easily editable and you can make a diff on two different versions.

If you are a user of Altium Designer you may know that you can code custom scripts in the following languages:

Where to find plug-and-play add-ons?

Great news: You don’t have to be a programmer to use scripts!
You can grab some great ones from elsewhere: friends, colleagues, websites (please be careful to only execute add-ons coming from safe places). I personally am a contributor of the “Altium Designer addons” bank of scripts but I also like AltiumScriptCentral very much, and I’m sure there are plenty of other great scripts made by other great guys.

NB: Some scripts have a graphical user interface (GUI) but some haven’t, so don’t worry if no window is shown when you execute a script.

How to run a script?

A while ago I’ve written a guide on How to run a script from inside Altium Designer. It’s a good starting point for anyone aiming at using scripts. As a summary, you have 2 ways to run scripts from the AD interface: run it from the “Run script” menu (AD18 and newer: File > Run Script ; AD17 and older: DXP > Run Script), or launch it from a custom menu item or toolbar. If you use the “Run script” option you can directly browse your hard drive to launch scripts. Select a script project (PrjScr), a script file and the function you want to execute (a script file can contain many different functions).

You can save some script paths in your Preferences to re-use them quickly later. Scripts can also be integrated inside PCB projects if that makes sense to you. If you do so, the “Run script” dialog should show any available scripts from the open projects.
If you prefer the “menu” option, my page about “Menu SVN” should help you a lot.

Want to have a more “visual” example? Watch this tutorial video from Petar Perisin:

I will try to post about writing custom scripts in the near future. Stay tuned 😉
While you are waiting, get ready by having a look at the official documentation about scripting in Altium Designer.

Great news: I finally wrote an article for all of you who want to develop custom routines for Altium Designer!